Slotted screws are inserted in grooves and can then be screwed to the component. The slotted screw is fitted with a T-piece, which is pushed into the slot.

What do many people think of the term Slotted Screw? Many people who have already hardened the term connecting screw know such wood screws or machine screws as they are the standard today. But what exactly is a slotted screw and what advantages does it offer compared to conventional screw connections? Of course, we would like to go into this special type of screw in more detail so that everyone can understand what such slotted screws achieve. But we do not only want to explain this, we would also like to take a closer look at the detailed structure and also the material from which such T-bolts are made. In order to provide even more information regarding such screws, we would also like to present our stock range and, as always in the last section, describe the production process. But let us start by describing the exact structure of a slotted screw in more detail. Unlike all other conventional screw connections, a slotted screw has a head that has been worked out and prepared for a T-slot profile. These slotted screws are not simply used as a connecting element like a normal screw, but these screws are used as insert elements. But more about this later. The shank of the grooved bolt, which is firmly connected to the head, opens directly at the head. This threaded shank is ultimately also the component of a slotted screw, which at a later date also enables fastening with a nut. The thread can then be a metric thread or even an inch thread. These T-Slot Nuts are designed for a very special task. These little helpers can be inserted into so-called grooves in profiles. By the intelligent design of a slotted screw, insertion into a profile can create an anti-twist protection, which enables tightening by nuts without the slotted screw turning. No tools need to be held against the head. Since the head of the slotted screws has a square design, it is not possible to turn them within the profile. Furthermore, a freely available position in the groove can be freely defined and can also be repositioned at a later date. A great advantage of such a slotted screw. The materials used are always solid steel, which in most cases is slightly burnished to prevent corrosion. If you want to have it even more rustproof, you can also use a stainless steel slotted screw, because corrosion can be excluded. As a rule, V2A stainless steel is completely sufficient, but sometimes acid resistance is also required for certain applications, so that the slotted screw must be used as V4A stainless steel.

Slotted screws, especially in the T-version, have become sought-after connecting elements in all technical areas, because structural engineering, especially with aluminium profiles, has become increasingly popular in recent years. Especially such T-slot profiles, where the slotted screws can simply be inserted or screwed in, have become so popular as a quick construction method in recent years that many mechanical engineering companies are using them as a cost-effective manufacturing variation. Whether for machine hoods or other devices, the slotted screws made of burnished steel or even stainless steel, must be manufactured in large quantities and also delivered to the companies today. However, it is precisely this circumstance of fast delivery and high availability that is often a problem in times when warehousing is slowed down by excessive costs. So more and more online shops have to offer grooved screws in all possible designs so that customers have fast and unlimited access to such important fasteners. In order to ensure these deliveries, our customers from Germany and the rest of Europe have also asked us whether we can also set up a category of slotted screws, so that we can work towards the availability of such standardized parts in the industry. We have been looking for a supplier who can produce T-bolts and we have found one, so that we can fill our category step by step, so that we can compensate for the delivery bottlenecks. Through the provision of our online shop, it is possible for all our customers from Germany and the rest of Europe, to buy the slotted screws quickly and cheaply through our online shop. However, this does not mean that the issue of security can be neglected and so we have decided to switch the entire domain to the secure SSL encryption system. This gives your data new security aspects and makes it harder for third parties to access your data. This makes shopping for your slotted screws via our online shop even easier and safer. We would also like to show you some quick steps how an order process in our online shop should be carried out, so that you can have your slotted screws delivered quickly and easily. If you are now in this category of slotted screws, you can get a short overview and choose the slotted screws you need. Then please put them in the shopping cart in the desired quantity and you can now buy further products or pay for the stainless steel slotted screws already in the shopping cart. Please create an account and enter all your data. Now change to the shopping cart and continue until the payments are displayed. Now pay for the slotted screws and you will receive an order confirmation by email with all details. Now we can also process your order and make it ready for shipment to you.

The production of slotted screws

Having arrived at the last section, we would like to give you not only the collected details about slotted screws made of steel or stainless steel, but also some explanations concerning the production of slotted bolts. We have already been able to explain a lot more about the use of T-bolts and the construction, but now we would like to tell those of you about the production. In this context we would like to give you a short introduction to the production on earlier, older machines and later also to the production of slotted screws on modern machines. The old, former screwing machines had a metal cam control, which controlled the whole mechanical machine. This procedure of setting up the machine took a very long time, for this reason only large lot sizes could be produced, which caused an intermediate changeover to another type of T-bolt. Let us now return to the economical production with modern machines equipped with a CNC. These machines for the production of slotted screws are machines which are equipped with a milling head in order to also produce special screws, such as slotted screws, which have to be treated with a milling process after the turning process. In the machine itself, there is a machining head that takes care of all the manufacturing processes. In order to enable "unmanned" production, either in night shift operation or during the day, loaders are always used to control the entire production process. For strand material the bar loaders are always used, which can also stock thicker material. In order to enable the production or manufacture of such metal grooved bolts, the CNC program must first be loaded and the machine must also be set up. When this point is completed, the start of the grooved screws can be started. To do this, the first piece of stainless steel as V2A or V4A is loaded into the machine and first of all the shank of the slotted screws is turned down to the core diameter. Now the milling of the T-bolt is done, which is taken over by the milling head. Once this process is completed, the thread is cut, which is usually a metric thread or can also be an inch thread. For this purpose, the thread is rolled onto the shank, which is then taken over by the thread rolls. For this purpose, the shank of the grooved screw is now pressed under pressure into the roll, where the thread can then be transferred. Now the cutting off of the bar material takes place. This process is repeated until the desired quantity of grooved bolts is reached and can then be stored in our warehouse. 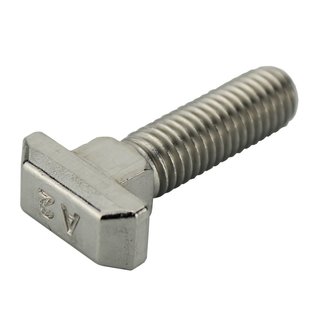 including 19% VAT. , plus shipping (Standard)

Please ask for separate orders with us - which do not run through the online store - always the current prices. Since all suppliers announce strong price increases at the moment! Partially even daily price increases, especially in the steel or stainless steel sector! The same applies to the availability of all articles!

Our Payment options for private buyers, companies, offices, authorities, schools, churches and all institutions with public fundings within Germany

Item not in stock or not available? Please ask us. From an order value of 100 Euro we also order larger quantities (if available) extra for you. Here more Information

Furthermore, you will also find the minimum order value or the minimum quantity surcharge for deliveries below a value of 20 Euro

You do not pay sales tax, for a delivery of goods outside the EU!

To see our products without sales tax, create an account in our online store. Then enter your delivery address and if the country of delivery is outside the European Union, you will now see all items without VAT (only when logged in).

we wish you a pleasant shopping with us. All orders will be processed and shipped quickly. We wish you a successful year 2023!

If you need larger quantities, please contact us directly by mail. We will then clarify all the details.

we wish you a pleasant shopping with us. All orders will be processed and shipped quickly. We wish you a successful year 2023!

If you need larger quantities, please contact us directly by mail. We will then clarify all the details.

This shop uses cookies - both for technical reasons and for improving your shopping experience. If you continue to use the shop, you consent to using of cookies. (more informations)